Have you tried writing your wishes on a piece of paper and offering them to the gods?

In Japan people have a unique way of offering their wishes, using the Japanese ema.

Since the beginnings of human culture, people have sought blessings and good fortune from the sacred realm. Whether that realm is believed to include certain deities, gods, spirits, or other forces, a sense that both harm, as well as great fortune, may emanate is universal among humans everywhere. The practice of writing a personal wish or prayer on a wooden plaque called ema usually takes place at Shinto shrines throughout Japan.

The practice of writing a personal wish or prayer on a wooden plaque called ema, usually takes place at Shinto shrines throughout Japan. This practice dates back to the Nara period in the 8th century when members of the aristocracy and later the military elite would donate horses (believed to be vehicles of the gods) to the local shrine along with wishes for protection from some negative force. Eventually, painted plaques with horse images came to replace the actual animals as the offerings, and by the Muromachi period (14th – 16th centuries), the subject matter of the plaques expanded beyond just horse images— though the name ema remains (e means “painting or picture;” ma means “horse”).

By the 17th century Edo period, making such offerings at shrines became common among everyone in society to receive blessings and good fortune. In contemporary Japanese society, this is most commonly done during certain times of the year, like the New Year and during exam season. People purchase their ema at the local shrine and write their prayer on the back and then hang it at a designated place—usually under the exterior eaves of the shrine roof or around a sacred tree—for the gods to receive. Nowadays, the kinds of wishes most often seen are for good health, marital bliss, childbirth, success on school exams or at work, and traffic safety.

Nowadays ema are recognizable as a small wooden plaque with an image painted on the front, often accompanied by the word gan-i (meaning “wish”), and a string through a hole at the top for hanging. It also comes with a wide variety of ema shapes that can now be seen such as other animals like the face of a fox (inari), or characters from pop culture or anime. Even on the traditionally shaped ema, a broad range of images are available—everything from the 12 zodiac animals (especially popular during the New Year season) to images of heroic warriors or auspicious symbols. Of course, the original picture of a horse can also be found. 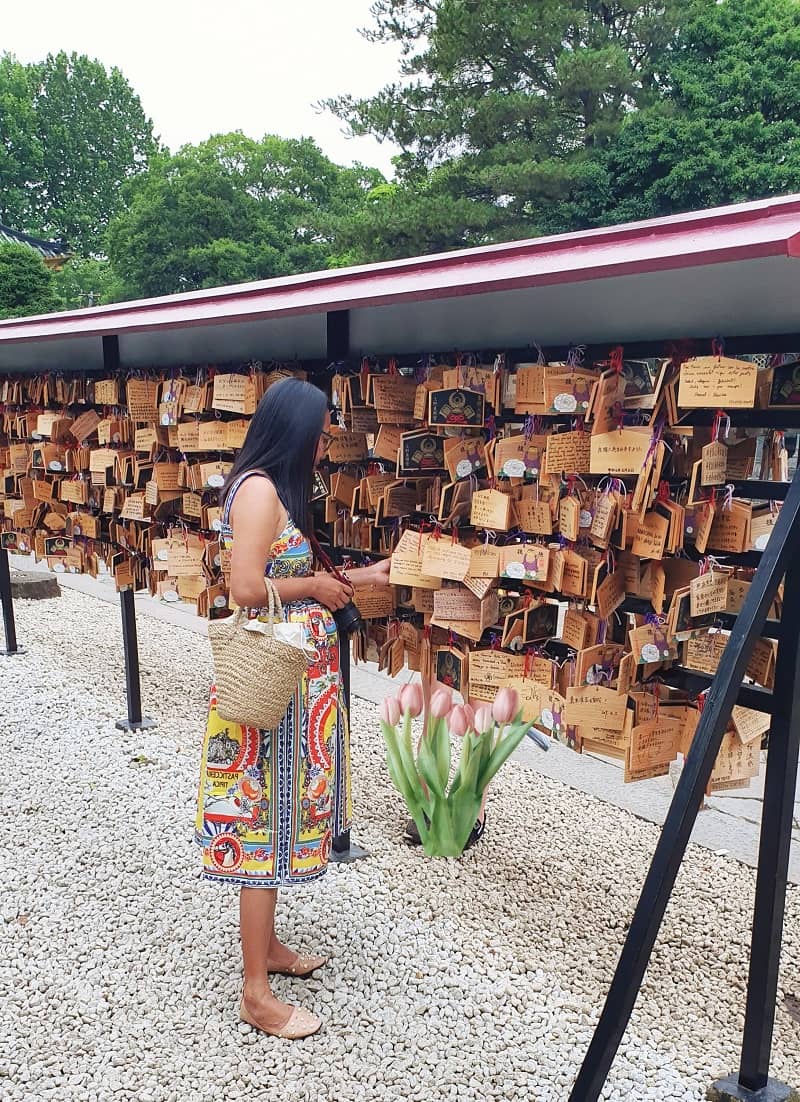 No visit to Japan is complete without a visit to a Shinto shrine. Shrines and temples abound in Japan and the easiest rule of thumb to distinguish between them is to consider the approach way. Shrines are approached by a path, whether narrow or broad, that passes beneath a Torii, a ritual entrance gate. Shinto rituals are largely about purification and when visiting a shrine, purification starts here by passing through the Torii.

The visitor purchases the ema from the shrine attendants, and so contributes financially to the shrine, and the attendant not only sells it but blesses it too. The illustrations on the front of the ema are done by hand in watercolors, or screen printed, but some are sold blank so that the shrine visitor can produce their very own, unique ema.

The visitor then writes a prayer, though perhaps its better interpreted as a personal wish, on the reverse side of the ema and hangs it, with countless others, on a frame specially designated for that purpose, and from which the kami, the enshrined deities, receive them. 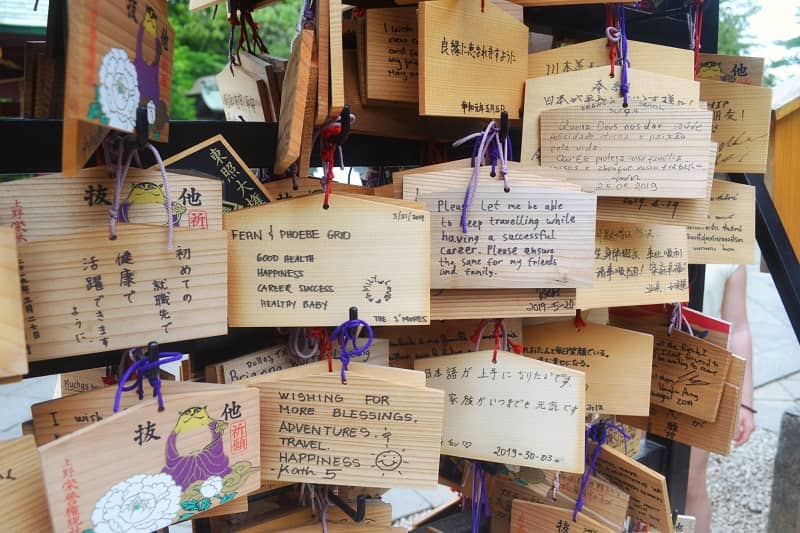 1. Buy Ema at the shrine office after visiting the main shrine building.

3. Write your name (only the initial of your name is fine too!) and your age so that the god can know the wish is yours. Some shrines and temples determine what you should write on Ema, such as date of birth and address, including the date of your visit. You do not have to write in Japanese.

4. After you finish writing your Ema, hang it on display near you. Then, dedication is all completed so just try hard and wait till your wish comes true!

5. As long as you write from your heart, the gods don’t care how many words or which language you write down. There’s usually nothing written or drawn on the front side of the ema. But since there are no rules, you can write additional messages or draw something. Some people draw playful pictures that match the original one on the front. Anyone can purchase the ema usually they cost around 500-1000 yen. Proceeds go to the shrine. Think about it as a form of giving to charity.

Visitors who have good faith often visit the shrines to give thanks and pray for their wishes.

Once your wishes come true, feel free to visit the same shrine where you hung your ema, and don’t forget to give thanks to the deities. And write your next ema again!